Home News Australian Dollar Finds Its Feet After 5-Week Slump but Will End the Year No Higher, Says Poll

Australian Dollar Finds Its Feet After 5-Week Slump but Will End the Year No Higher, Says Poll

The Australian dollar made sweeping gains last week as investors’ preference for higher-yielding assets trumped a sequence of poor Australian economic data. The currency’s broad climb marked the end of a difficult period that had begun in late January and came as a new poll suggested a lack of FX volatility for the remainder of the year. The Australian dollar ended Friday buying 0.785 US dollars, 0.638 euros and 83.8 yen.

The “aussie” entered the year with verve, particularly against the US dollar, against which it climbed to a two-and-a-half-year high on January 26th, but things took a turn for the worse from then on as investors began to revise upwards their expectations for US interest rates.

A difficult five-week period culminated in early March with US President Donald Trump’s announcement of US tariffs on imported steel and aluminium – tariffs that some said threatened to spark a global trade war. Given Australia’s open economy and reliance on commodity prices, threats to global trade are taken extremely seriously by Australian dollar traders. In the five weeks preceding the last, the currency lost, on average, 5% of its value against the US dollar, euro and Japanese yen.

Holders of Australian currency were hoping for better but the week started with ominous undertones as the aussie gapped lower on Monday’s open against several other G10 currencies.

Aussie bulls were then left hiding under their duvets following news on Tuesday morning of weak Australian retail sales growth (+0.1% for the month of January, versus a forecast of +0.4%) and a current account deficit in excess of A$14 billion for the first time since 2016.

Traders also appeared to think little of the RBA’s message on Tuesday afternoon that wage growth “appears to have troughed” and that domestic and global economies are improving.

It was much a case of “Cometh the hour, cometh the Americans,” as US-based investors flocked into growth-sensitive and higher-yielding assets, including the Australian dollar, in the first few hours of Tuesday’s New York session. 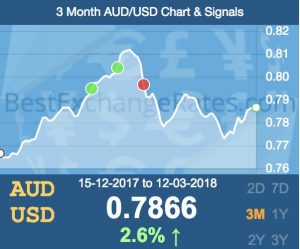 The currency was erratic on Wednesday but went on to make the most of post-central bank slumps in both the euro and yen, and Friday’s post-payrolls weakness in the US dollar.

While gains for the week averaging just 1.7% against the three aforementioned currencies will hardly inspire those with a serious interest in the Australian dollar’s value, these are indicative of a general reduction in exchange rate volatility this year and last, but do still mark an achievement of sorts. Against the Japanese yen, for example, a gain of 2.4% represented the aussie’s best weekly performance in more than eight months.

Technically, with 82.0 acting as a springboard below AUD/JPY last week, 1.6 remaining a useful ceiling for EUR/AUD (0.625 in AUD/EUR), and with weekly charts showing a host of bullish candlestick patterns, the Australian dollar appears to be well positioned in the short term.

In the medium term, according to forty analysts polled by Reuters in early March, the Australian dollar is set for an unusual lack of volatility over the remainder of the year. Such will be the lack of volatility, that one-month, three-month and year-end median estimates for AUD/USD are all at 0.78 – just 0.6% below Friday’s close and virtually unchanged from 2017’s year-end rate of 0.7801.

The latest forecasts do at least represent an upward revision on those from the turn of the year. Approaching the end of 2017, most analysts were predicting a fall in AUD/USD to levels between 0.7 and 0.75 by the end of 2018.