The Turkish lira weakened on Monday morning by as much as 4.2% against the dollar after Sunday’s decision by the Turkish government to immediately suspend all non-immigrant visa services at Turkish consulates and embassies in the US.

Turkey’s tit-for-tat decision came just hours after the US announced the same thing.

Washington said on Sunday that it would be suspending all non-immigrant visa services to Turks in light of “recent events,” which have forced the Trump administration to “reassess the commitment” of Turkey to the security of US diplomatic offices and personnel within its borders.

The diplomatic row follows last week’s arrest of a US consulate employee in Istanbul for alleged links to religious leader Fethullah Gulen – the man that President Erdogan blames for a failed coup attempt in July 2016.

In what appears to be an attempt to mock or irritate the US, in its own statement, Turkey repeated word-for-word much of what the US had said, including references to “recent events” and Turkey’s need to “reassess the commitment” of the US to the security of its diplomatic facilities.

Unnerved by these developments, traders rushed to sell the lira in the first two hours of trading on Monday, which pushed USD/TRY as high as 3.7716 at one stage, from Friday’s close of 3.6119. A period of calm followed and the lira managed to make back some of its lost ground. By 03:30 GMT, USD/TRY was back in the mid-3.71s; still nearly 3% weaker than its value on Friday. 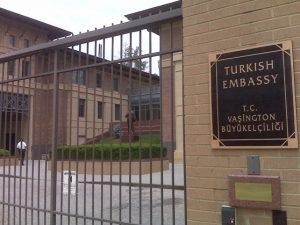 Monday’s movements put the lira down 9% against the dollar in the last four weeks and down 4.8% this year.

Potential investors continue to be frightened away from the lira and ownership of Turkish assets in general by inflation, which remains stuck in double figures. Consumer prices in Turkey rose 11.2% in the year to September according to official data.

Given the lira’s history, foreign exchange traders will be expecting an attack on the major 4.0 handle in USD/TRY sometime in 2018. USD/TRY’s post-redenomination high (lira low) came in January this year at 3.7812.

Compare FX Providers and Banks for:

Get a Better Deal when you Send and Spend Abroad.
Do NOT follow this link or you will be banned from the site!
_Follow_Us_
General advice: The information on this site is of a general nature only. It does not take your specific needs or circumstances into consideration. You should look at your own personal situation and requirements before making any legal, accounting or financial decisions. The foreign exchange rates and products compared on this page and website are chosen from a range of products that bestexchangerates.com (BER) has access to and are not representative of all the products available in the market. We may receive referral fees in relation to your activity on the BER website however this doesn't affect the exchange rates or fees you are charged. The use of terms "Best" and "Top" are not product ratings and are subject to our disclaimer.