A practical foreign exchange and currency guide to Israel

What's in this Israel currency guide:

What currency is used in Israel?

The official currency of Israel is the Israeli new sheqel, with symbol ₪ and currency code ILS.

Things to know about the Israeli new sheqel

The addition of ‘new’ in the official name of Israel’s currency creates a distinction between the current shekel and the original (or ‘old’) shekel used between 1980 and 1985. The original shekel had been ravaged by hyperinflation and was replaced in 1986 by the ‘new’ shekel at a rate of 1000-to-1.

A single shekel is subdivided into 100 agora.

Historically, the shekel’s valuation has been at the mercy of Middle East politics. The shekel has been labelled by some a “conflict currency.” 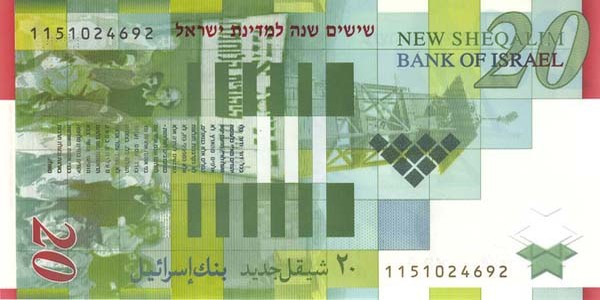 The shekel has been rising back to the levels of the start of 2022 when the shekel was at decade highs versus the US dollar over the 0.30 level. Shekel strength is associated with higher in-flows mainly for technology investments.

In mid-January the Bank of Israel increased FX interventions to tame the shekel. This worked with ILS/USD dropping over 10 percent to 0.28 in July.

The below comparison table makes it easy to find the best exchange rates and lowest fees when you want to make a Transfer or Spend Israeli new sheqel.

Israel is a place that stores the passions of many people around the globe: the beauty of its hills and valleys, the stillness of the Dead Sea, the multi-coloured canyon of Makhtesh Ramon, and the ancient walls and pathways of Nazareth and Jerusalem. There are also plenty of ways to relax in Israel, from the bars and beaches of Tel Aviv and Haifa, the wineries of the Galilee and tables loaded with mezze.

What currency should I take to Israel?

You can use ATMs to get cash. You also need to tell your bank that you will be in Israel and the dates so they don’t freeze your card due to unusual activity. You can always take some cash from the ATMs at the airport so you have shekels in your pocket when you leave the airport. Since it is a set rate regardless of the withdrawal, if you take a larger amount the percentage of the fee is less. There are ATMs everywhere in Israel. Whatever currency your account is in, the cash you withdraw will be in shekels. You should use shekels for purchases in Israel where possible as it is preferred by the locals. If you want to bring some US dollars or EU dollars, you can exchange these at ‘exchange shops’. These ‘hole in the wall’ kind of places are absolutely legit and you get a good rate as they tend to be competitive. You do not want to change money at a bank. This is a long and rather painful process and completely unnecessary. You can also use your credit card in most places assigned from street stall vendors.

Like anywhere unfamiliar, traveling in Israel using public transport can be confusing at best, traumatic at worst. But worry not — an app called Moovit provides accurate bus and train schedules, plus directions and routes to make your travel experience as smooth and easy as possible.

Every week, from Friday sunset to Saturday sunset, the Jewish Sabbath sees Israel either shut or quieten down, depending on where you are. In Jerusalem, you’ll struggle to see a car and most establishments will be closed. Even in secular Tel Aviv the air is noticeably quieter and the atmosphere calmer, but there is still a lot going on, with many restaurants and bars staying open. Public transport throughout the country ceases to operate during Shabbat.

When visiting holy sites such as the Wailing Wall, modest clothing is essential, especially for women. This means skirts or trousers that go below the knee. If you forget then don’t worry, as religious women volunteer to hand out garments to those showing excessive skin by the Wall. When you visit any shuk (market) in Israel, it is expected for customers to haggle with the sellers. Whether you’re buying a swimsuit, a necklace, or a new beach mat, you should always try to lower the price.

As a city Tel Aviv could not be more different to Jerusalem. Tel Aviv is Modern, vibrant and cosmopolitan. Having a good time is the prevailing vibe in this hip, bustling Mediterranean party town. In Hebrew, the city’s name means ‘Hill of Spring’.