A practical foreign exchange and currency guide to Sint Maarten

What currency is used in Sint Maarten?

The official currency of Sint Maarten is the Netherlands Antillean guilder, with symbol ƒ and currency code ANG.

Things to know about the Netherlands Antillean guilder

The below comparison table makes it easy to find the best exchange rates and lowest fees when you want to make a Transfer or Spend Netherlands Antillean guilder.

Sint Maarten, the Dutch side of the island, is completely different from the French side. With its tourist-friendly nightlife, slew of shopping centers including duty-free shops in capital Philipsburg, tacky casinos, numerous condo units and sprawling resorts, it can sometimes feel overdeveloped and artificial, but you’ll also find a few peaceful, picturesque beaches around Simpson Bay and Little Bay.

This 37-square-mile island, ringed with white-sand beaches, has been living with a split personality since 1648, when it became the smallest parcel of land to be peaceably shared by two countries: France and the Netherlands. When you visit St. Maarten, the Dutch side in the south, it bustles with sprawling resorts, wide boardwalks, lively beach bars, and late-night casinos. Meanwhile, sleepy French St. Martin, with its harbor full of brightly colored boats and houses built up into the cliffs, is reminiscent of a Mediterranean ﬁshing village. Thanks to the French inﬂuence, you’ll also ﬁnd some of the best food in the Caribbean.

What currency to use in Sint Maartin?

Despite the dominance of the euro since January 2002 within the mother country, Holland, the legal tender on the Dutch side of St. Maarten is still the Netherlands Antilles florin (NAf). U.S. dollars are really the coin of the realm here, and prices in hotels and most restaurants and shops are designated in dollars. On the French side (as well as on St. Barts), the official monetary unit is the euro, with most establishments widely quoting and accepting either dollars or NAf guilders as well.

Getting around in Sint Maarten.

Sint Maarten is home to the island’s biggest airport, Princess Juliana International Airport, at Simpson Bay, which serves all intercontinental and numerous regional destinations. The island’s cruise-ship terminal, Port St Maarten, is located in Philipsburg. A handful of other marinas have ferries to neighboring islands.

Take the bus Things move at a more leisurely pace in the Caribbean, so take advantage of that by taking the bus to the top tourist sites. There’s no set schedule for drop-off and pick-ups, but you’ll get where you want to go for about $1.50 one-way.

Rental car or taxi are the best ways to get around but beware of heavy traffic. Trisport rents bicycles, while Johnny’s Scooter Rental rents scooters and ATV quad bikes.

Sint Maartin is a popular stop for cruises.

The peak season begins in December and ends around mid-April, as frozen travelers from the United States and Canada flock here to escape the cold at home. One of the island’s most famous events, the Heineken Regatta, takes place in March. Travel to St. Maarten drops off between July and October, hurricane season in the Caribbean.

The island offers the visitor many choices in the type of accommodations available to them. You can select a luxury villa or a simple guest house with many options in between. Many visitors to the island will be surprised to find the selection of villas available many at a price less than a standard hotel room on other Caribbean Islands. For Scuba divers, you will find a number of smaller resorts geared towards your needs. There are only a limited number of scuba liveaboards that sail from the island.

Bring your appetite to St. Martin/St. Maarten, because you’ll most assuredly put it to good use. Fresh seafood is often the star of many menus here (it is an island, after all), but there is a rich variety of cuisines to be found, from high-end French to Lebanese to Italian to traditional barbecue. Typical Creole dishes often include conch, goat and oxtail. You’ll also want to try the island’s national liqueur, Guavaberry, made from rum, cane sugar and local, wild guavaberries. A bottle also makes a great souvenir to take home. 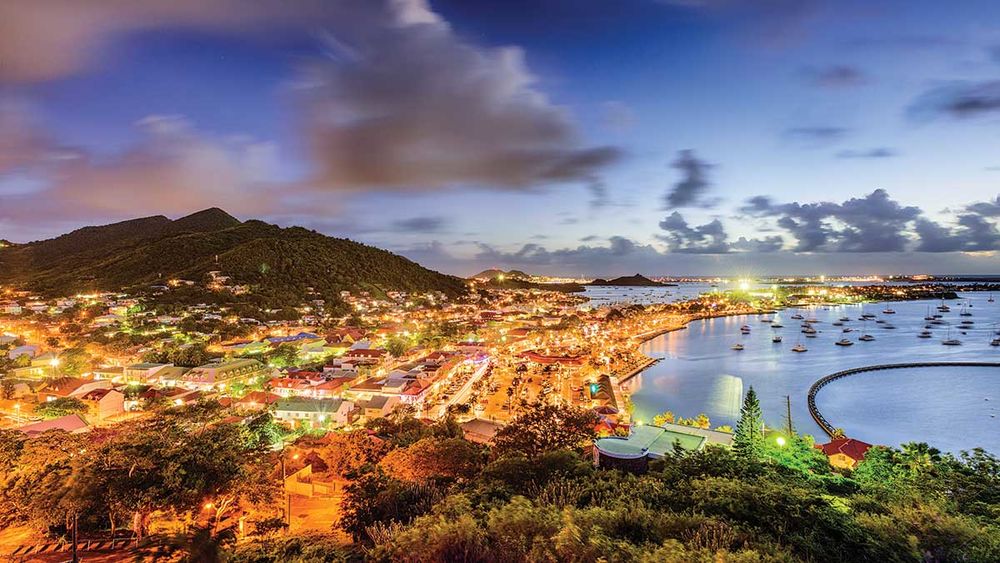 The Netherlands Antillean guilder is also the domestic currency in 1 other countries.