A practical foreign exchange and currency guide to Thailand

What's in this Thailand currency guide:

What currency is used in Thailand?

The official currency of Thailand is the Thai baht, with symbol ฿ and currency code THB.

Things to know about the Thai baht

The Thai baht is subdivided into 100 satang.

The baht is termed an ‘exotic’ currency, which means that there is far less participation in the market for baht than in the market for more established currencies, such as euros or U.S. dollars. For this reason, the price paid to change your money into or from baht (the price being equivalent to the market bid-ask spread) is far higher relative to the amount of money being changed than it would otherwise be.

Thailand’s central bank manage the baht’s value under a ‘managed float’ regime, which means that the bank will intervene at times in the foreign exchange market to reduce what it sees as excessive volatility in the currency and to maintain national competitiveness, i.e. the bank will at times weaken the currency to boost demand for Thailand’s exports.

As an exotic currency, the baht is considered riskier than currencies from major developed nations, which means that its value will fall against the FX majors (especially JPY, USD, CHF, GBP and EUR) during periods of economic uncertainty or when global geopolitical risk is elevated, or during bouts of high market volatility.

The below comparison table makes it easy to find the best exchange rates and lowest fees when you want to make a Transfer or Spend Thai baht.

In between the busy cities and scattered towns of Thailand is the rural heartland, which is a mix of rice paddies, tropical forests and villages living the farming lifestyle. In the north, the forests surround tall blue mountains scattered with shining waterfalls. In the south, scraggy limestone cliffs rise up from the cultivated landscape like ancient towers.

The official currency of Thailand is the Thai BAHT (pronounced – baaht). ATMs are everywhere and usually reliable, most Thai banks now charge a 200 baht fee per withdrawal when you use their ATMs with a foreign card.

Thailand is a very popular and safe place to travel to, but still always use common sense. Depending on the type of hotel, try not to leave credit cards, passports, and other valuables lying around your room when you are not there. Instead use the room safe, or the hotel main safe. If you want to store your cards there while out shopping (shopping is considered a national pastime) you could get a Travel Card before flying in to ease your mind.

Another good reason to get a Prepaid Travel Card is that credit card fraud exists in Thailand, as in any other country.  If you must pay by credit card, don’t let your card out of your sight. Watch as its used, and double check the purchase amount and currency, before signing or entering your pin number. 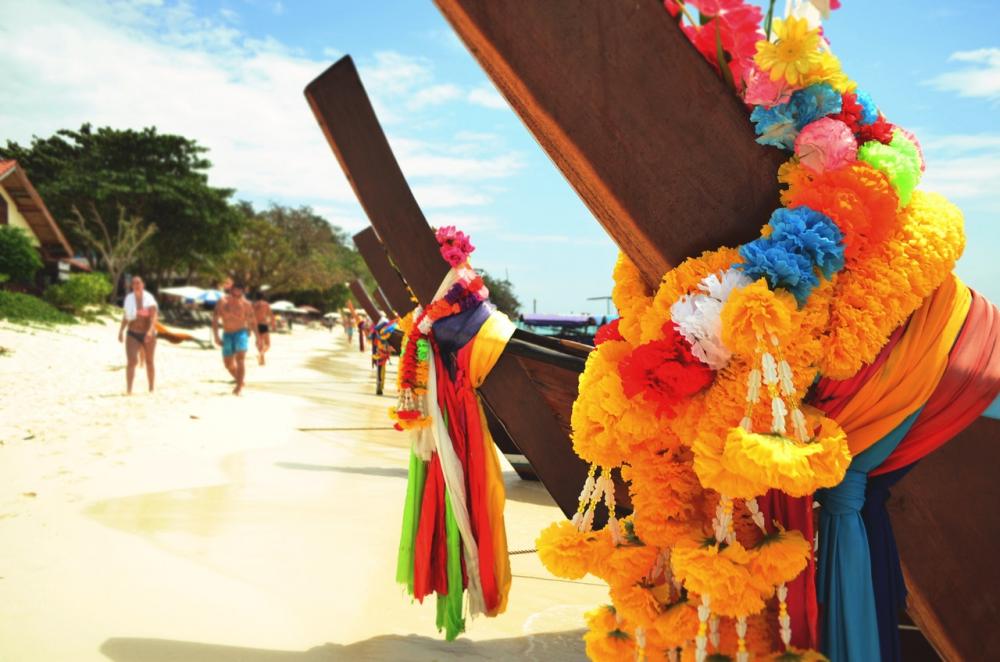 Be prepared to pay more than locals for many tourist attractions have two rates, where there can often be a rate for locals and a larger rate for tourists. Many tourists head to Thailand for its lovely beaches, just know that Thai beaches do not have lifeguards so try to stay in sight on other people, check all the signs, and avoid swimming on deserted beaches. Drink bottled water, its cold and cheap and since it can be hot all the time in Thailand have some on you at all times to avoid dehydration.

How do I travel in Thailand?

Taxis are available everywhere, just when getting in make sure the meter is set to THB 35 to avoid being made to pay extra.Getting around in Tuc-Tuc’s is part of the experience but can get annoying as the driver may often try to take you to shops on the way. Just negotiate a fare before jumping in, don’t pay until you arrive, and be prepared to jump out and take another one if they go to a shop and refuse to leave until you check it out or buy something.

Trains and buses to get around the country in Thailand can be an experience, but due to the travel times and budget, many recommend flying everywhere. Flights within Thailand are relatively cheap, and it may not be worth spending valuable vacation days traveling by bus or train. By way of example, the train from Chiang Mai to Bangkok is about 12 hours, and the train down to Phuket (close to Phuket, but then you have to take another bus) is another 8 hours, so it will take about 20 to 24 hours of travel time from Chiang Mai to Phuket. Or you can take a 2 hour direct flight on Thai Air Asia for less than $60.