What's in this Saint Pierre and Miquelon currency guide:

What currency is used in Saint Pierre and Miquelon?

The official currency of Saint Pierre and Miquelon is the euro, with symbol € and currency code EUR.

The European Central Bank surprised markets mid July when it increased interest rates by a half a percent, the first rise in over a decade.

The euro earlier had hit parity against the greenback over the impact of Russian oil and gas threats plus uncertainty over ECB interest rate plans.

The euro fell to a multi-year low around parity to the US dollar and as winter approaches the short term news for the single currency is all negative.

Travelling to Saint Pierre and Miquelon

A trip to the French islands of Saint-Pierre and Miquelon is a must for anyone planning travel in eastern Newfoundland. With a piece of Europe just 20 km from the province’s southern coast, why wouldn’t you plan an international trip? That being said, a visit to the archipelago does require some preparation. The islands of St-Pierre and Miquelon aren’t just French-like with their berets, baguettes and Bordeaux, they are France, governed and financed by the tricolore. St-Pierre is the more populated and developed island, with most of its 5500 residents living in the town of St-Pierre. Miquelon is larger geographically but has only 600 residents overall.

Jacques Cartier claimed the islands for France in 1536, after they were discovered by the Portuguese in 1520. At the end of the Seven Years’ War in 1763, the islands were turned over to Britain, only to be given back to France in 1816. And French they’ve remained ever since.

Air St-Pierre flies to St John’s, Montréal and Halifax. There are two to three flights weekly to each city. Taxis to/from the airport cost around €5. From Fortune on Newfoundland, the St-Pierre Ferry makes the hour-long trip to and from the island once daily (twice on Wednesdays) in July and August. It runs less often the rest of the year. Departure times vary, so check the website. Boats carry foot passengers only, though plans are in the works for two car ferries. 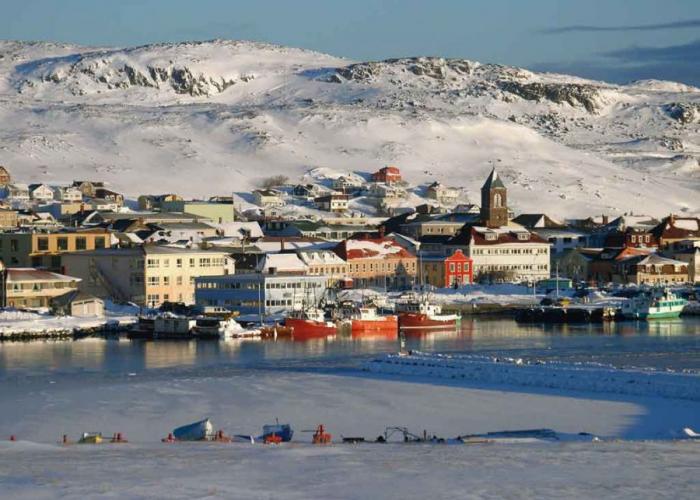 The archipelago is a relatively small region that hosts a fair number of tourists each season. As a result, accommodations are limited, and it can even be a challenge to find supper during the height of summer, if you’re not prepared! Plan your trip as far in advance as possible, and book accommodations, excursions, and dinner reservations as soon as you’ve decided on dates. Getting the logistics sorted out early means you’ll be able to experience everything you want to, without worry.